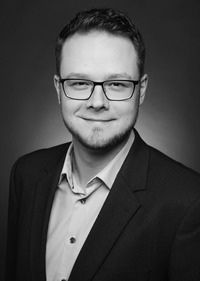 Dr. Gero Guttzeit is an Assistant Professor in the Department of English and American Studies at LMU Munich. After completing master’s degrees at the University of Edinburgh and Justus Liebig University Giessen, he was awarded his doctorate in Giessen in 2014 for a thesis written at the International Graduate Centre for the Study of Culture (The Figures of Edgar Allan Poe: Authorship, Antebellum Literature, and Transatlantic Rhetoric, DeGruyter 2017). He worked for a year at Ghent University in Belgium as a postdoctoral researcher and managing editor of the journal Authorship and taught as a Visiting Assistant Professor at the University of Wisconsin-Milwaukee. His work has also appeared in such venues as Forum for Modern Language Studies, Scholarly Editing, Journal for the Study of British Cultures, and Anglistik.

His second book project (“Habilitation”) hypothesises that invisible characters in literary narratives are metaphorical embodiments of the subject and its fraught history between autonomy and subjection. The project charts the first literary history of invisible characters, mapping the diversification of invisible subjects since the emergence of the metaphor of the invisible hand in Adam Smith’s writings. The project thus traces major lines of development of vision, recognition, and surveillance in epistemology, poetics, and ethics from the eighteenth to the twenty-first century. The workshop on The Literature of Invisibility will address the relevance of literature and its various genres for current debates on social and political recognition, i.e. for the questions of who is socially invisible and who becomes visible.