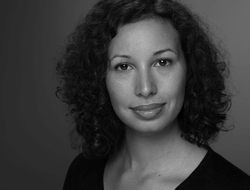 Sarah Fekadu-Uthoff is an Assistant Professor at Institute of English Philology at LMU Munich. She studied comparative literature, English and philosophy at the universities of Tübingen and Warwick and at the FU Berlin. She received her Ph.D. from the LMU in 2010 with a thesis on the relationship between music and literature in English and American modernism as part of the international doctoral program ProLit. This was followed by positions as a member of the academic faculty at the Institute of Comparative Literature. From October 2014 to July 2015, Sarah Fekadu-Uthoff was a postdoctoral fellow of the Volkswagen foundation at Washington University in St. Louis. Her research interests center on postcolonial and diasporic literature and theory, with a particular focus on Anglophone African literature. Further subjects she has written about and taught include the literature and poetics of modernism, travel literature, and the theory of autobiography.

Her stay as a Junior Researcher in Residence at CAS is devoted to her second book project titled "Ethiopianism: Discourse and Desire in English and Anglophone Literature, 1750 to Today." The project seeks to analyze representations of Ethiopia as manifestations of a transcultural intertextuality that not only had a profound impact on diasporic discourses but also on European modernity. By seizing the transnational circuit of an African idea, the project seeks to rethink established models of cultural interaction in which Africa has traditionally served either as counterpoint to the West or as mythical origin of a diasporic culture.