In cooperation with the LMU UniversityGallery changing exhibitions take place on the premises of the Center for Advanced Studies. 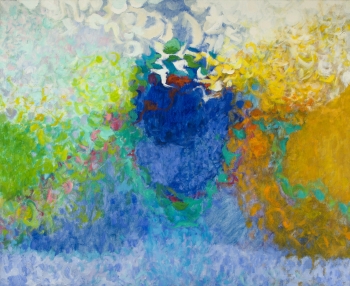 The next installment in the series Art at CAS features Heinz Kreutz. The 18 works on display in the winter semester 2010/11 provide insight into the later work of Heinz Kreutz.

"He is concerned not with effects, but with his goals. Heinz Kreutz aims to free color from its compulsion to represent and reproduce, and to allow it to be experienced as an independent phenomenon between light and darkness. When disconnected from objects, color discovers its form, he once said. This is a realization which opens up inexhaustible possibilities". (Gert Heiland)

In 1952, Heinz Kreutz founded the group of artists known as "Quadriga" with Otto Greis, Karl Otto Götz and Bernhard Schultze. The works produced by this group were the first to open up individually varied access to the international Art Informel in post-war Germany, and thus made a significant contribution to reviving the connection of German painting to the artistic avant-garde. From that point on, Heinz Kreutz drew and painted with water color, pastel and oil techniques, producing "unusually dynamic values of expression" (Christa Lichtenstern) which he presented in series or in multi-part picture compositions, always remaining faithful to the aims of "Quadriga" - namely the liberation of color from its compulsion to represent and reproduce.

At the Vernissage on 21 October 2010 Prof. Dr. Christa Lichtenstern will give the introduction.